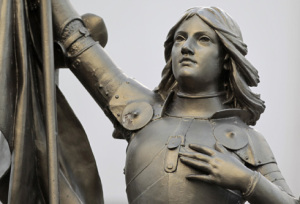 A statue of Joan of Arc is seen in the courtyard of the headquarters of France’s National Front political party in Nanterre Jan. 5. France is marking the 600th anniversary of the birth of the saint, who, as a teenager, was burned at the stake after leading a military campaign against English invaders. (CNS photo/Charles Platiau, Reuters) (Jan. 9, 2012) See FRANCE-JOAN Jan. 9, 2012.