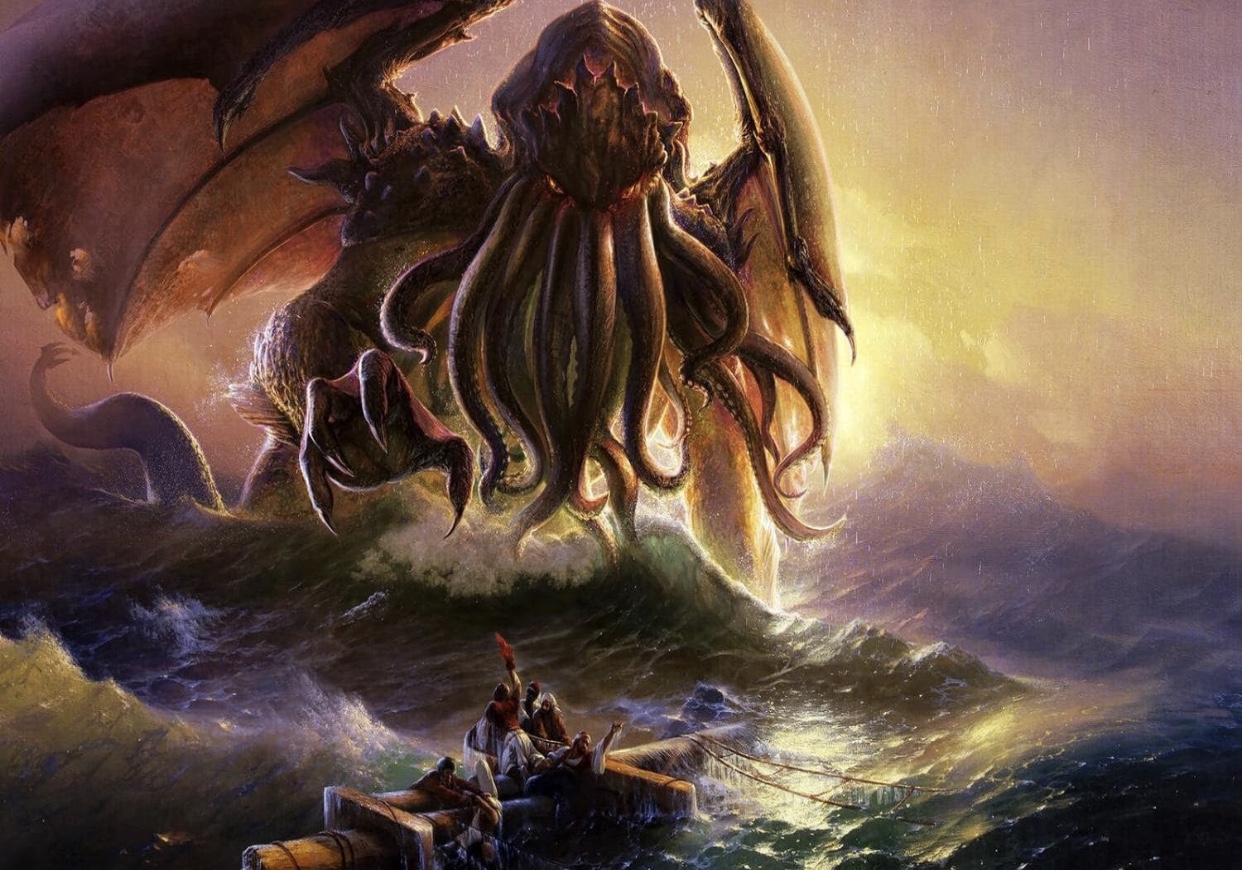 An Octopus spirit is a ruling spirit that is operating in conjunction with various tentacles, which are demonic spirits and sins of the flesh. The head is typically a spirit of idolatry or witchcraft (control). When I started to seek the Lord for insight into the nature of the Octopus spirit, my husband brought it to my attention that one of the worlds’ favorite demons, as seen in popular culture, is an octopus like demon called Cthulhu. Much can be gleaned about a spirit from the way it choses to gain glory for itself through the arts and media.

H.P. Lovecraft wrote, ‘The Call of Cthulhu’ in 1928 and this demon has grown in popularity ever since. Cthulha has been featured in movies, video games, stories, and music. A quick google search will pull up hundreds of artist’s rendering of this sprit. Ursala, the sea-witch in little Mermaid is another example of how popular stories can tap into the nature of the real life evil they represent.

How an Octopus Spirit Has the Traits of an Octopus?

The octopus directs the arms for the purpose of grabbing, holding, and constraining the prey from moving forward. The arms also have a bit of autonomy to operate apart from the head, and can grow back if they are cut off. In the same way, people that are being tormented and controlled by the octopus spirit may get deliverance from one fleshly demon only to find the same or similar snare sneaking back up on them during a more ‘opportune time.’

Octopuses are super smart and adept at finding their way into tiny places both to hide from predators and to go after their prey. They can change the shape of their bodies and fit into the tiniest of places.

Give these demons a crack and they will find a way to enter in and devour!

A person may be unaware that they are still dealing with these demons once they have already tasted deliverance because they will lie low when they are about to be discovered. Octopuses are experts at camafloucging themselves to avoid predators. They can blend into their surroundings by changing both their shape and color. This spirit manifest itself in the life of a believer by convincing them to enter into ungodly sexual relationships, represented as a godly union. Another way they attack is by deceiving a person into believing their situation is different in a way that means specific scriptures don’t apply to them.

An octopus spirit wants you to take natural desires and fulfill them in ways that are out of balance or outside the bounds that the Lord has ordained for them to be fulfilled.

The arms of the octopus are used to bring its’ prey to its mouth where it will then be broken down with a sharp beak before being digested. There is a breaking down of a person that happens when they give into a sin of the flesh. With each compromise the flesh becomes more of a powerful force over the spirit man and the spirit man is weakened to resist the demonic entities seeking dominion. The Octopus spirit’s main goal is to use whatever fleshly appetite a particular person is prone to give into in a wrong or imbalanced way as a means to bring them into addictive, destructive, or obsessive patterns that they then become powerless to break free from without deliverance.

What are the Sins of the Flesh and How Do You Overcome Them?

‘You, my brothers and sisters, were called to be free. But do not use your freedom to indulge the flesh; rather, serve one another humbly in love. For the entire law is fulfilled in keeping this one command: “Love your neighbor as yourself.” If you bite and devour each other, watch out or you will be destroyed by each other.

‘But the fruit of the Spirit is love, joy, peace, forbearance, kindness, goodness, faithfulness, gentleness and self-control. Against such things there is no law. Those who belong to Christ Jesus have crucified the flesh with its passions and desires. Since we live by the Spirit, let us keep in step with the Spirit. Let us not become conceited, provoking and envying each other.’

For people that have already been delivered out of a fleshly addiction such as pornography, gluttony, fits of rage, or jealousy and selfish ambition, this demon team will wait for a time the person is weakened through life pressures, or when they are regularly neglecting the spiritual disciplines of prayer, study, and fasting and squeeze back into any crack they can find.

For example, a married person that was once addicted to pornography, if not mindful to love, pursue, and appreciate their spouse may find that they are regularly noticing and thinking about a coworker or having emotional or sexual reactions to other women. It is not enough to stop doing the wrong thing, one must also be led by the Spirit to do what is right.

In order to get and stay free, we are to submit ourselves to God and be led by the Spirit.

This holds true for any addiction, which is just a modern term for idolatry. If one doesn’t diligently guard their thoughts and take every thought captive, the place which was once occupied by one spirit may end up being occupied by EIGHT spirits, seven more wicked than the first. I do not believe that it is a coincidence that the octopus have 8 arms. When a person continuously gives into an appetite of the flesh, it opens the door for demons. If there is no deliverance, before long the person will be given over to all kinds of fleshly bondages.

“When an impure spirit comes out of a person, it goes through arid places seeking rest and does not find it. Then it says, ‘I will return to the house I left.’ When it arrives, it finds the house swept clean and put in order. Then it goes and takes seven other spirits more wicked than itself, and they go in and live there. And the final condition of that person is worse than the first.” ~Luke 7:26-27

The Importance of Being Well-Balanced, Sober Minded, Self-Disciplined, and Temperate

The Word of God says in 1 Peter 5:8, ‘Be sober [well balanced and self-disciplined], be alert and cautious at all times. That enemy of yours, the devil, prowls around like a roaring lion [fiercely hungry], seeking someone to devour.’

marked by moderation: such as
a : keeping or held within limits : not extreme or excessive : mild
b : moderate in indulgence of appetite or desire
c : moderate in the use of alcoholic beverages
d : marked by an absence or avoidance of extravagance, violence, or extreme partisanship

There are some desires that are not sin in and of themselves. Temperance must be practiced in all things to avoid being sucked into the traps of the enemy. Is having a piece of cake going to open the door for a demonic octopus arm to grab hold of you? No. Is having a piece of cake every day going to cause a crack? Maybe not. Maybe. Each person must be led by the Spirit in moderation.

Whatever is not of faith is sin.

When one piece leads to a second and a third, and one day with two pieces leads to the next needing three, or when a person finds they can’t go a day without the sugar they are now craving, sometimes to relieve stress, sometimes to mask their anger, etc. clearly, idolatry has a hold. The enemy will have the crack that is needed to build a stronghold in the believer’s life.

Whether it is an obvious sin like lust, or a less obvious sin such as envy or excessive and compulsive eating of sugar or drinking of coffee, the sins of the flesh, if allowed free reign, will grow in their power over a person and give the arms of the octopus spirit room to wiggle in and grab hold of a person’s life, break them down, and render them powerless to get free.

If you or someone you know is being taken down by addictive or compulsive behaviors that correlate with the sins of the flesh listed in Galatians 5 and you believe that the Octopus spirit has a hold, one of the best ways to break free from this grouping of spirits is through prayer and fasting.

There is no shame with recognizing and admitting that demonic spirits have a stronghold or that you have open doors in your life because of habitual sins of the flesh.

The Octopus spirit is a grouping of spirits with witchcraft, sometimes in the form of a controlling or Jezebel spirit, or idolatry, as its head and spirits named by their corresponding fleshly sins such as lust, rage, selfish-ambition, or gluttony as their arms. In order to get and stay free, one must stop just chopping off the arms and go for the head.

Attack the head and the arms will die. Cut off the arms and leave the head intact and the arms will grow back, the demon will go get others more evil than itself, and eventually the condition of the person will be worse than it was to begin with.

If you have battled addictions and compulsive fleshly habits and warred against the demons they invite in to no avail in the past, it’s time to step up your battle plan with a Biblical fast or a series of fasts.

I am offering a two part ECourse on Biblical fasting to anyone that is needing guidance and support on their fasting journey into greater levels in the glory and greater freedom than they have known before.

I believe that this is an extremely important equipping for those that desire to go deeper in Christ. Whether you have experience with fasting and just need a refresher course and encouragement to go for it again, or you have never fasted before and have no idea where to even start, this course is for you.

I believe that when you step out to fast, or fast again, the grace and power of God is going to show up and empower you to move into greater levels of glory and freedom than you have experienced before. You can enroll in this course through our online school at:

Other scriptures on the sins of the flesh:

Galatians 5:19-21
Now the deeds of the flesh are evident, which are: immorality, impurity, sensuality,

1 Corinthians 3:3
for you are still fleshly. For since there is jealousy and strife among you, are you not fleshly, and are you not walking like mere men?

Romans 7:5
For while we were in the flesh, the sinful passions, which were aroused by the Law, were at work in the members of our body to bear fruit for death.

Ephesians 2:3
Among them we too all formerly lived in the lusts of our flesh, indulging the desires of the flesh and of the mind, and were by nature children of wrath, even as the rest.

James 3:15
This wisdom is not that which comes down from above, but is earthly, natural, demonic.