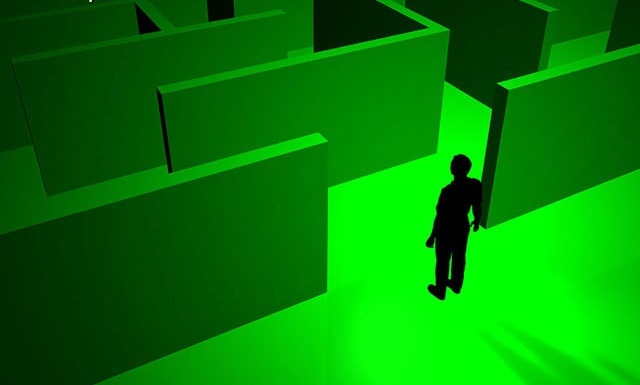 After seeing the person moving through the maze, going down corridors, opening and going into different doors for some time, I notice that they now have a blind fold on. They are still having to feel their way through, but are beginning to realize they are blindfolded and completely blind to where they are going.

Realizing this helps them. They pause to assess the situation. They realize the blindfold is to train their ability to be led by spiritual, instead of physical, eyes.

I see a lot less pointless searching. Less frustration. Less frantic looking. Less anxiety. A door is opened, stepped into even, but instead of plowing ahead there is a pause. There is no need to go further because of a knowing, apart from sight, or even touch, that the door leads to nowhere.

Back in the hallway the person grows silent and contemplative, slowly beginning to trust their ability, until eventually they are at a complete stand still. They stand waiting; listening.

Measured, but confident steps, are taken down the corridor, hands still feeling the surrounding walls until they stop confused by the wall mounting up from the floor directly in front of them.

Standing in front of the wall a recognition that the path is straight through the wall arises. Hands pressing, groping for a possible lever that might open a hidden door finally fall to their side, defeated.

Having grown more confident in the silences, they listen. With a deep breath they step forward, straight into the wall, straight through the wall-it parts to make a way before them.

Things begin to make sense; the maze,the doors that lead to nowhere; the dead ends; the blindfold; they are all for training.

I still see the person in the maze from above, but I shift perspectives and see the blindfolded persons’s point of view:

They are being led by a Light. No walls, doors or corridors exist for them.

There is only darkness and Light.

2 thoughts on “The Maze”